When Sonar’s “mum” Cheryl approached me about working with them to fix Sonar’s separation issues I jumped at the chance and couldn’t wait to get started. Having recently lost my beautiful little deafy Mabel, tragically and suddenly to a brain tumour, my heart went out to little Sonar. I hoped that my first-hand experience of living and working with a deaf rescue would be an added bonus to our training.

It is quite common for rescue dogs to develop separation anxiety. It seems even more common with rescues brought in from abroad. We don’t know exactly why this is but I can only assume that being taken from a familiar place, uprooted and transported must be stressful and cause these dogs to feel insecure and worried. Likewise, deaf dogs can also be more insecure as they are not able to pick up on as many cues as dogs that can hear, and therefore find life a bit less predictable.

As a young deaf podenco all the way from Spain, Sonar was in not one but three risk groups (rescue, foreign and deaf), however she’d struck gold landing with Cheryl who had quickly noticed her struggling when she wasn’t around (even when Sonar was with a friend or relative). Cheryl suspended absences straight away, and booked in her online separation training package with me. 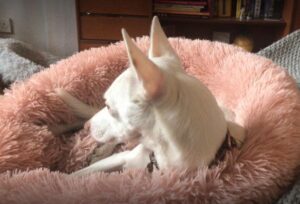 In many ways, helping a deaf dog overcome their separation anxiety is exactly the same as with a dog that can hear. We need to very gradually expose the dog to small absences carefully working below the anxiety threshold to help them understand that being alone is safe and that they can just relax. It is really important to stop leaving a dog with separation anxiety for longer than they can handle, so because Cheryl was already doing this we were off to a great start with Sonar.

The important thing that isn’t always obvious with separation training, is that to be successful, the dog has to know you’ve left the house. It seems obvious when I say it, yet it is really common for people to tell me they managed to leave their dog alone for x number of hours by sneaking out. My reply is always the same – “if your dog didn’t know you were gone, it doesn’t count!”. Not only this, but disappearing while your dog isn’t paying attention is even more likely to make them insecure, and ramp up hyper vigilant behaviours like following you around the house, resting in areas where they can view all exits, and sadly in some cases even not resting properly at all for fear that if they relax and go to sleep they’ll wake up alone.

For dogs that can hear, leaving in a normal way provides plenty of leaving cues – coats zipping up, keys jangling, doors opening and closing. Sonar would not be able to perceive most of these (although deaf dogs can be incredibly tuned in to vibrations), so we needed a way of making sure she knew Cheryl was going out.

To help treat Sonar’s separation anxiety, we needed a clear visual cue so that Sonar cold start to understand that an absence was about to happen. Cheryl had the fantastic idea of using a plastic guitar from the game “Guitar Hero” that had been at the back of the cupboard gathering dust. Sonar had never seen the guitar before which was important as we wanted something with no prior meanings or associations.

span style=”font-weight: 400;”>Once the visual cue was in place, Cheryl & Sonar went about diligently completing their separation training exercises, with the guitar signifying the start of absence training. After each set the guitar went away to show the exercise was over. Sonar was always such a joy to watch on camera – super cute when curled up or chilling but equally as adorable when she was in a cheeky mood, raiding cupboards and coats!

Under Cheryl’s careful guidance Sonar went from strength to strength. When I left them she was quite calm and happy for 15 minutes. I recently found out they are moving soon too, so Sonar can have  her own private garden which I am super excited for. Huge well done to this wonderful little team, wishing them continued success and happiness for many years to come!