I was doing a bit of research the other day for another project I am working on, and was astounded to discover that during the pandemic, the number of dogs in the U.K. alone has gone up by an estimated 3 million individuals (Pet Food Manufacturers Association figure 2020-2021).

Now that is a lot of new dogs, and whilst I am sure many are rescued and rehomed, there’s no denying that there’s been a boom in the puppy population so puppy separation anxiety is a pretty hot topic at the moment! 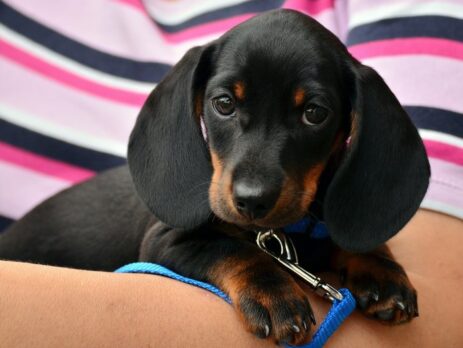 Help! My puppy has separation anxiety!

At the time of writing, barely a day goes by when I don’t receive an email or consult referral from a puppy owner, worried their new friend as the dreaded separation anxiety.

They’ve heard their puppy cry and howl when alone at night, or worse, the entirety of the 2 minutes they’ve spent trying to have the worlds quickest shower. As per seemingly all the advice out there, they’ve set up a nice cosy crate, only to find that the moment the door is closed their happy-go-lucky pup turns into a raging, furious ball of teeth and claws, or worse, sobs and wails.

Friends, family and even so called “trainers” keep pushing the idea that it is best to “rip off the band aid”: to let the puppy cry it out until they “learn”. “Start as you mean to go on” they say, or “if you let them get away with it now they’ll never respect you”. I can tell you that all of this is complete piffle, and if there is only one piece of advice you take away from this article please make it that you walk away from any trainer who offers advice that risks traumatising your puppy. It simply isn’t worth the heartache and expense in the long term.

I hear all of these things so often from clients whose puppies or adolescent dogs are showing all the signs of separation anxiety. And this in itself should tell you something – if all this advice worked, why do these poor dogs end up needing professional help?

What you need to know about separation anxiety in puppies

The most important thing to understand about separation anxiety in puppies is that it is totally normal for a puppy to find being alone or confined very worrying. If your puppy is below 6 months of age there is a very good chance they simply wouldn’t survive on their own, and they certainly wouldn’t survive if trapped in a small space. Survival instinct is a strong force, and nature has done a great job at programming dogs with plenty of warning systems and resulting behaviours to try and address situations that don’t feel good.

As you raise your puppy, it is worth bearing in mind a little background on the animal you have in front of you. The majority of the world’s domestic dogs are free roaming to a greater or lesser extent. They have a long and exciting history – one which has seen them being bred and selected for thousands of years for their sociability and for specific behaviours, many of which are considered “working” traits (thinks like scenting, retrieving, barking and so on). What they haven’t really done a lot of is sitting in houses on their own.

In the “wild” as it were, puppies would remain with their canine family for substantially longer than the 8-12 weeks at which most house pets are taken away. At this point in their lives, the “separation anxiety” many pet owners think of as problematic is actually completely functional and a necessary survival instinct if the puppy is to make it through adolescence and into adulthood.

During this extended time with mum and siblings, a puppy’s confidence and independence would develop gradually over a period of weeks and months. Only from 6 months onwards would they really have the strength and wit to survive alone, and many will stay with family and friends until much later still.

Does my puppy have separation anxiety?

When you take on a puppy at 8-12 weeks of age, you’re not just purchasing a pet, you are taking over the role of family and the responsibility for teaching your pup all about the world – what is fun, what is safe and if you are not careful, also what is scary or unsafe. Watching your puppy carefully will help you guide their development, and is important as your puppy is completely unique and won’t follow the same developmental trajectory as any other puppy!

Because separation anxiety in dogs isn’t a clearly defined condition, it can also be really tricky to say at what point a puppy might be considered to have problematic separation anxiety. However, if your puppy is under 6 months of age and hasn’t been left to “cry it out” yet, there is a good chance that all you are seeing is a normally apprehensiveness that, with time, you can alleviate as your puppy grows in confidence and independence.

If your puppy has been left for a period of time and panicked, this is more likely to be problematic as your puppy probably now has good reason to feel that being left alone is going to be awful. Likewise, dogs with generally nervous or anxious demeanours or those that show signs of behaviour problems in other areas are more likely to need professional help to overcome separation anxiety, as are those that have suffered separations such as being rehomed or losing a member of the family.

If you are not sure whether your puppy’s separation anxiety is a normal part of their development, or whether you have a developing behaviour problem on your hands you might also like to check out this article, which goes into greater depth on how to figure out if your dog has a separation anxiety problem or not. 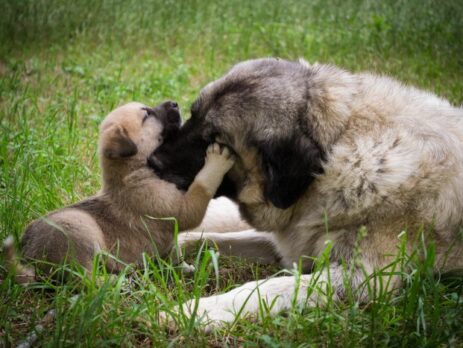 What should I do if I think my puppy has separation anxiety?

First of all, don’t panic! Puppies generally have a good recovery rate if they do have a separation anxiety problem, but to be honest there is also a very good chance your puppy just needs a little bit of time to develop and gain confidence and independence.

Whether your puppy shows a normal level of puppy anxiety, or appears to have a separation anxiety problem, the single most important thing to do starting now, is to make sure your puppy is never left alone.

This might involve asking for help from friends or neighbours, or hiring the services of a professional dog walker or day care as well as adjusting your schedule, however it is crucially important to making sure your puppy doesn’t keep having their anxiety triggered. As we say in the dog training world – “practice makes permanent” – so the more times your pup finds themselves alone, hates it, and reacts badly, the more likely you are to keep seeing this pattern in the future.

Stopping absences/ separation acts as a circuit breaker and gives you the time and space to help your puppy feel safe and calm when spending time alone. It isn’t forever, and it won’t cure separation anxiety on it’s own but it will boost your success for sure. Read my next article to learn more about separation training for puppies, or my top 5 tips for helping a dog that does have a separation anxiety problem.

About your dog separation anxiety specialist

My name is River and I am a separation anxiety specialist... read more

I had the best news today, little Ruby the cockapoo aced... read more

It’s that time of year again, the weather is getting warmer... read more

It’s that time of year again, the season so many pet... read more

One of the things I commonly hear from separation anxiety clients... read more

How do you know that your puppy has separation anxiety? There... read more

How to build up alone time with your separation anxiety dog

If you’re new to dog training, you may not yet have... read more

Like pretty much anything separation anxiety related, there’s some seriously mixed... read more

How tech can help you solve separation anxiety

As a self -confessed technophobe, I have to admit that it... read more

How to help a dog with separation anxiety

Separation anxiety causes so much stress and upset, and yet despite... read more